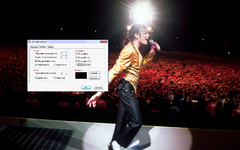 Michael Jackson Screensaver is a tribute to the king of pop in the form of screensavers. A multitude of Michael Jackson's photos are included in this screen saver that will adorn your PC with spectacular images of the legendary singer.

There are many scenes immortalised in this pack: amazing dances, awards ceremonies, childhood photos and much more. Each of them will appear on the monitor taking into account the transition time period you define yourself, allowing you to set other settings such as the action to be taken to close the screensaver and the size of the pictures.

Michael Jackson Screensaver also offers you the possibility to personalize the effects that will take place when the images of an authentic mass idol are shown, which captivated many generations with an unmistakable voice and movements that only he could capture on stage.